5 Characteristics of a Healthy Family: Family Members are Valued 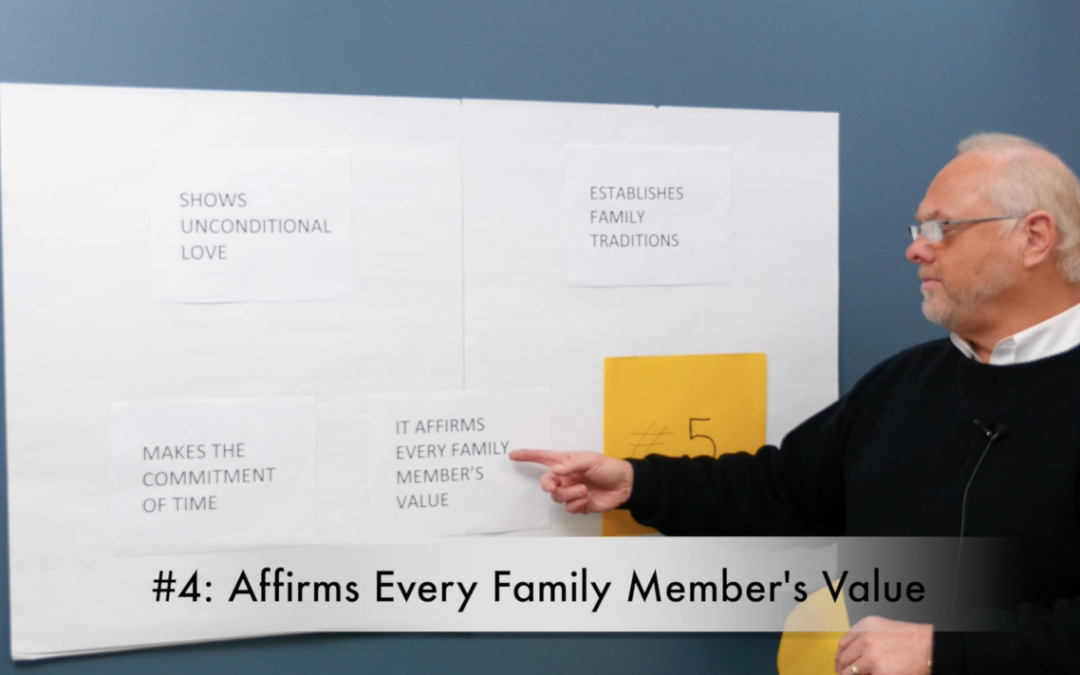 We’ve been talking in the Christmas season about a healthy family. The challenges that come from every corner of society to attack the family are many. Understanding the ingredients to a healthy family are critical to succeed at what God’s called you to do and who He’s called you to be. Thus far, we’ve covered the first three characteristics. Today, we’ll talk about the fourth one. You can catch up on the rest of this series on my Youtube channel.

#4: It Affirms Every Family Member’s Value

Sometimes we get so busy that we don’t really take the time to connect and bond. I like to say it this way: A healthy family has healthy bonds and healthy boundaries.

One of the best things that a father and a mother can do with their children is learn how to emotionally bond with their children. That’s why even nursing is so important, because it’s in that time that the mother and the baby bond together. But it’s also important for the infant to start bonding with the father as well.

It’s important to keep this bonding process active as they get older. I can tell you that as they enter those teenager years, there can be an emotional separation. That’s when you really have to turn up the emotional bonding activities with your children to keep them connected to you.

How we treat one another in the family is really how we’re going to treat other people. That’s again where the home becomes a laboratory for relationships in society. In fact, if a person is from a healthy family with good relationships, then it’s more than likely that that person has healthy relationships as an adult. That person has had their value affirmed by their family. So instead of walking into society insecure and disconnected, they’re walking in secure and healthy and happy. That helps them relate to and be a blessing to other people. We really learn how to treat people by how we treat our family members.

In other words, the environment of a family really creates who is coming out of that family. That’s why we need to have a healthy family. Here are a couple of steps for doing that.

Now a healthy family should affirm every individual’s value: the husband’s, the wife’s and the kids. But let’s talk about affirming the child’s value. Here are a couple of healthy ways to build your child’s self worth.

Give them a feeling that they belong. Let them know that they belong in your family so that they are secure. Now this is not true in every situation: there are good families where children just don’t turn out the way you’d like to see them turn out. But more likely than not, if you give the child a feeling that they belong and are accepted, it increases their self worth. When they are older and confronted with the kinds of destructive behaviors that many people get tempted with, they will have a strong enough sense of self worth to not participate. Let them know your home is their home and they’re always welcome.

One of the things my wife and I did with our children was always make sure that our kids had their own room and own space in the house. That’s critical because you teach them how to be responsible with that space. They’ve got to clean their room. We also had our kids share the same bathroom until the seventh or eighth grade. That was a daughter and a son, and so of course the daughter would take longer to get ready. That was good for my son to learn how to deal with a lady! But as they got into high school, we allowed them to have their own bathrooms. It was a lot more peaceful in the house, but they also had to keep it clean. They couldn’t blame each other for why it was dirty.

In fact, I’m going to shock some of you with this statement, but I’m going to say it anyway. It’s more important for you to be a healthy family than a religious family. Of course, I believe that your relationship with God is vitally important. But sometimes people become full of fear and almost antagonistic in their fear. But they do it in the guise of religion. I always believe we must learn to be positive in our faith. We can be aware of the dangers around us without being full of fear. Sometimes there are things in religion, not in Christ, that are unhealthy for people if they’re not careful with how they deal with it.

Anytime something takes away from the self worth of a child and has to do with religion, it’s not good. The Bible doesn’t do that and Jesus doesn’t do that.

Give them a feeling that they are worthwhile. Find things to praise them about. A while back, “The One-Minute Manager” book came out. It talked about one-minute praisings and one-minute reprimands. That means that when you discipline a child or correct them, it should be short, quick, effective, but be done with it when it’s over. Do the same with praising. Always be active with your praise in building up your child, as well as your reprimands when they’re necessary. Be active, but don’t camp out there. Do it, deal with it, talk about it and move on. You want to create a feeling that they’re worthwhile and you can do that by giving them praise about what they’ve accomplished.

Thanks for tuning in for this series during the Christmas season. I want to remind you that we’re having our Annual Wealthbuilders Conference in Denver this January. In our Early Bird registration, we almost doubled our entire attendance for last year! So make sure you get in on our holiday sale and are able to buy your tickets. I’ll see you on another vlog another time. God bless you.

Join me every Monday for tips on entrepreneurship and leadership.