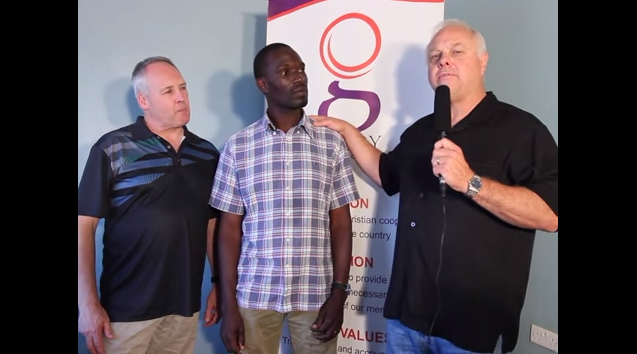 During my last trip to Uganda, I worked in some time to interview the people Tricord Global is helping through Glory Bank and GloTrans. Tricord Global is my microfinance non-profit and our goal is to transform the world one village a ta time. I believe that social impact investing is powerful. Tricord is how I put that into action!

Tricord Global began working in Kampala, Uganda when Mark Rowe and I got to know and appreciate Pastor Herberts. He had a vision to empower Christians and churches throughout the nation of Uganda. But it was the way he wanted to implement that vision that really impressed me.

Instead of fundraising and donating over and over again, Herberts wanted to develop a sustainable way to empower his fellow believers. What we don’t realize often is that over in these developing nations, religion can be a very dividing force. Herberts told us how the Muslims have a bank and the Hindus have a bank. And these banks only offer loans to followers of their religion! On top of that, these banks sometimes offer no-interest loans to fellow believers.

Christians and churches were unable to get loans! Churches would try to get loans for land, but they couldn’t get enough money. And so another religion would snag the land from them because they would come in and offer a much bigger sum.

After a lot of prayer, Herberts had the idea to start a Christian bank. He wanted to teach pastors how to financially manage their churches as well as spiritually lead them. And he wanted to offer them the opportunity to own their land.

When I heard about what Herberts was working on, I vetted it out intensely. But I was stunned! This was the kind of thing of my social impact investing dreams. I had never seen anyone tackle this issue like this before. So we worked out a $500,000 loan package and gave them some oomph.

Since then, GloTrans and Glory Bank (which is really a credit union) have changed a lot of lives. Glory Bank is a part of GloTrans. GloTrans offers larger loans, while Glory Bank really does the microfinance. Together, they help individuals start businesses and get out of poverty.

In this interview, David tells us about how there’s a huge divide between rich and poor people in Kampala. As it is, loans are only given to those who are already rich. Meanwhile, the poor stay poor because they have no access to capital.

David experienced the benefits of having GloTrans and Glory Bank in Kampala firsthand as he worked to start his ministry. I hope you are touched by his testimony! I know I was.

Tricord Global will soon be taking investment capital again. We have a vision to elevate GloTrans and Glory Bank to a Tier 1 Bank in Uganda!

Join me every Friday for tips on investing in yourself or others!